Multilayer piezoelectric actuators are ceramic elements for converting electrical energy into mechanical energy such as displacement or force by utilizing the piezoelectric longitudinal effect.
This multilayer stacked actuator is resin coated and can be applied on ultra-fine positioning mechanisms and drive sources.
Basic information is per the following, for reference purpose TOKIN’s catalogue can be downloaded from the button below. 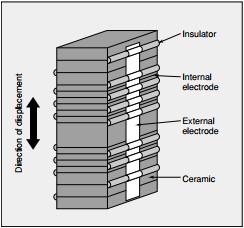 *The value was calculated based on the displacement value and Young’s modulus – 4.4 X 1010 N/m2

***Price stated does not include shipping cost and is negotiable if per order is greater than 50 units. 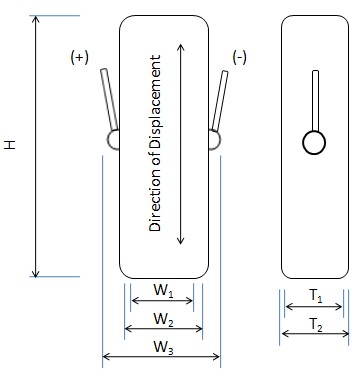 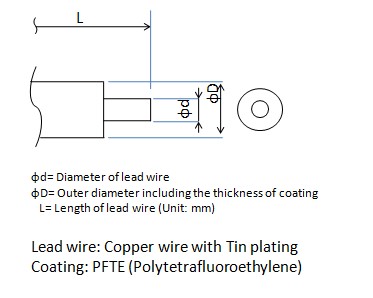 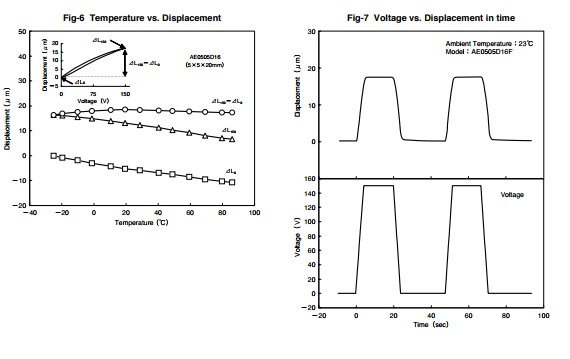 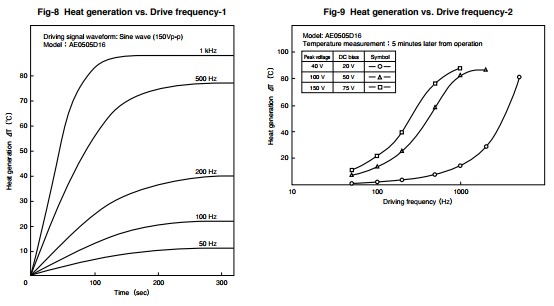 Piezo actuators can be influenced by humidity as well as applied voltage and ambient temperature.
Reliability of Tokin’s multilayer piezoelectric actuators for static usage is represented by MTTF (mean time to failure). The following description is only based on obtained data.

The MTTFr in actual applications is estimated using equation (1) below with MTTFs observed under accelerated condition as the reference value. 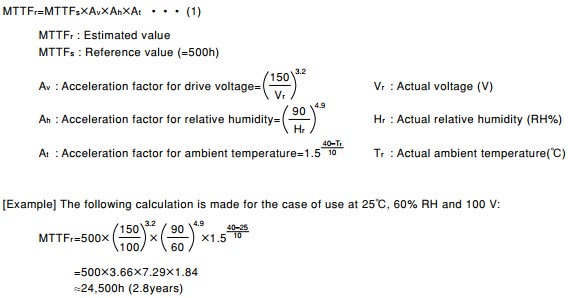 Temperature rises when driven by pulse voltage as a result of heating due to dielectric loss of ceramics.
Therefore the element is less influenced by humidity. The effect is affected by the element shape, pulse waveform and frequency, which cannot be calculated by an equation as in the case of DC voltage application.
In TOKIN’s testing on the AE0203D08, there was no failure confirmed after 0-150V rectangular pulse wave applied with 500Hz for 500 hours (equivalent to 900 million pulses applied).

Caution: Physical damage may occur due to ringing phenomenon caused by fixed method of the element and voltage rise speed.

* For reliability purposes, avoid handling these piezoelectric actuators (resin-coated) with bare hands, avoid excessive physical shock, and store preferably in a dry atmosphere (below 40% RH) at ordinary temperatures (-5 to +40oC), without vibration. Avoid condensation on the product surface.

* Prevent from being bent, twisted, tensile force applied (including the lead wire), as well as physical shock.
Reference: Guide for tolerance of twisting and tension

* If the actuator is exposed to high temperature above 100oC or it is used after long storage period (more than 3 months), it should by polarized using the circuit configuration and conditions shown below. 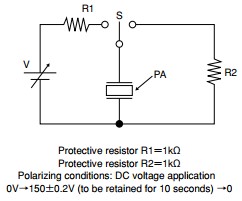 * Epoxy-based adhesives with high rigidity and minimum thickness are recommended for bonding. Do not form adhesives at the side of actuator.

* For thermosetting resin, perform polarizing treatment (mentioned above) again after the adhesive is settled.

Basically the voltage controls the aimed displacement and generated force.
・In driving, it is also necessary to take ringing due to the resonance or hysteresis of the element itself into consideration. Driving the actuator so that the rising speed is more than 3 times as much as the resonance period to prevent the device from ringing damage.
・In pulse driving, it is further necessary to pay sufficient attention to heat generation due to dielectric loss, charge/discharge current due to the capacitive component and the power output impedance as well. 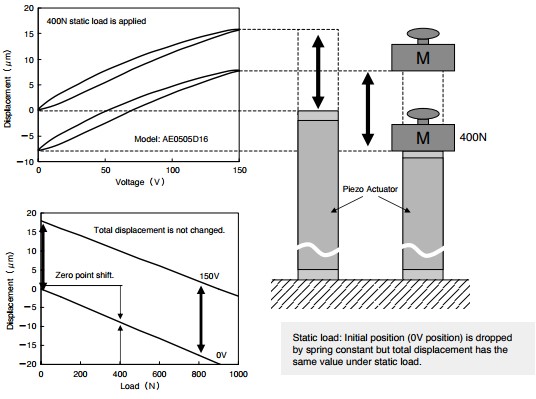 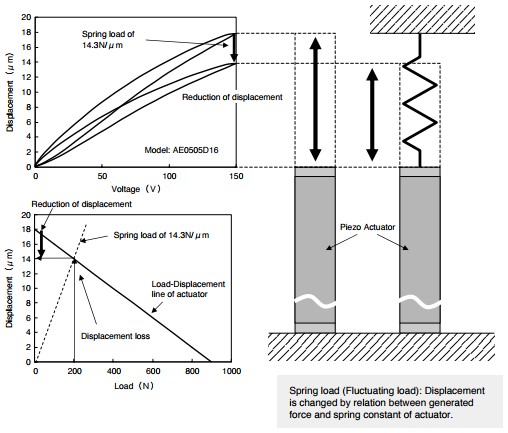